I haz a bucket!

An update on a project that I never wrote about, because I have been a bad blogger. Well, a busy blogger. But it is the dead of winter, and I've got visions of future crops dancing in my head, so I'm planning next year's garden and evaluating last year's experiments.
One tiny experiment I just concluded -- harvesting carrots from a two-gallon bucket drilled with holes for drainage and filled with home-mixed potting soil (45 percent aged compost, 45 percent peat moss, 10 percent vermiculite, plus some organic fertilizer.) I have trouble getting carrot seeds to germinate here once summer hits, because of the heat and extreme dryness. This summer was record-breakingly hot and dry, but once we returned from an amazing trip to Ireland and London last July, 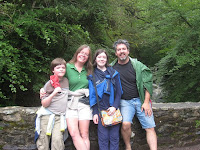 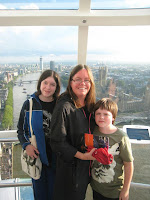 I experimented with starting carrots in a bucket in the shade. I didn't keep track of this bucket as closely as I could have and it spent more time in the semi-shade than it probably needed to through the heat of August, but I got great germination out of the seeds and when the first few frosts hit, I tucked the bucket in my new mini-greenhouse on the south side of our house: 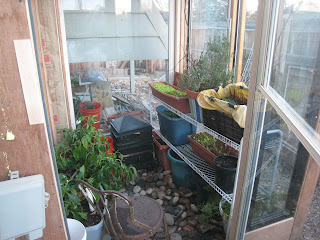 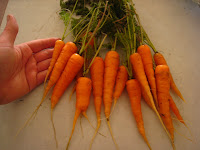 The white bucket in question is barely visible on the lower right of the photo, under the wire shelving. The carrots continued to grow until sometime in November, when the bucket essentially became cold storage. This is an unheated greenhouse, warmed only by escaping heat from a house window, and when it got down to zero outside (not sure now low the greenhouse got, low 20s at least, maybe colder) in December, the greens died back. So today, I harvested the carrots (using hot water to free the last few that had frozen into the potting soil) and found that they all grew straight and unforked, though not as large as I had hoped. I got a pound of carrots from the bucket and probably could have gotten closer to two pounds if I'd started the carrots sooner or had them in full-sun sooner. I was happy enough with the results to grow more carrots in buckets, especially given the heavy clay soil we have here. I think I'll start some larger containers with carrots in late winter in the greenhouse and mid spring outdoors.

If you look closely at the greenhouse photo, you'll see some red bell peppers in homemade self-watering containers up against the house. I absolutely love growing peppers in containers in this climate. I can bring them inside and continue to harvest them through early December. I cooked with my last fresh, homegrown pepper on Christmas day, which was deeply satisfying. The peppers are a rather fragile plant, especially when loaded with fruits, so I may start them in the greenhouse and keep them there all summer, rather than dragging them in before the first frost.

I have grand plans to grow cucumbers and melons vertically in the greenhouse as well this year. Meanwhile, I'm sorting through my seed stash, culling and organizing, and placing my Fedco order, as I sit by the woodstove on a chilly January day.

Blogs and sites that inspire and inform me